Since ancient times, the area of the middle Campidano and the Arbus area was exploited for the extraction of silver, zinc and lead. During the 19th century, the main mines came to life, the remains of which are still visible today. In Arbus,you can visit the mining complexes of Ingurtosu and Montevecchio.

The village of Ingurtosu is located at the bottom of the valley of „Is Animas“ and ends with the dunes of Piscinas. Nowadays it is an abandoned village, but in the past there was one of the most important mines in Sardinia, which could accommodate about 5000 people: it worked as a management centre for the mines of Ingurtosu and Gennamari. There was in fact a palace in a dominant position from which work was directed, called „The Castle“. The mining activity at industrial level started in 1858 and reached its maximum expansion at the beginning of the 20th century, when the mine became property of an English company. At the beginning of the 1950s there was a period of crisis that led to the closure of the plant 20 years later.

The church of Santa Barbara, consecrated to the patron saint of miners, was conceived and financed by Lord Brassey and was inaugurated on 21st May 1916.

The „Castle“ is located along the road coming from Montevecchio. Its large arch forms a sort of symbolic gateway to the mining village. Built on several floors, it housed the administrative and technical offices of the mine, which were arranged according to a social hierarchy.

The Washery Brassey, also called Washery Naracauli, came into operation in the early 1900s and was mainly intended for the treatment of blende, from which zinc is extracted. The plant, whose purpose was to wash or separate useful materials from waste, was for years among the most important in Sardinia and was dismantled in the 1970s.

The mining site of Pozzo Gal was in the hands of a French-Spanish multinational company during the 1920s and its purpose was the underground cultivation of blende, which was subsequently processed in the Washery Pireddu. This shaft reached a depth of 205 m, to which a 160 m descent was added, which was built once sea level was reached.

In this room you can see the compressors that brought  compressed air to the machines of all the galleries of the mine; the most important machines for the workers were  the perforators. These improved production, but caused many illnesses, due to the great weight carried for many hours, the repeated beatings on the miners’ chests and the dust breathed in. For these reasons, it was called “man-killers”. The situation improved when a pneumatic support and a tube spraying water onto the stone walls were introduced to reduce the dust.

The winch was used to winch up and down the cages carrying carts, ore and miners. In the last part of the shaft there was a room with a second winch, which only carried the carts. The system was initially controlled by two workers: a winchman standing opposite the shaft and a cage operator inside. Later, thanks to a hydraulic system, the controls began to be managed by a single person in the outdoor area

The worker’s salary was based on the system invented by Charles Bedaux, which involved timing a miner’s work over a given period of time. Those who did not meet the standards did not receive their pay and could even be punished physically, risking dismissal.

The sieve served as a decanter to separate the infertile minerals from the useful ones, and was used mainly by women. Children also worked in the mines, doing jobs that were difficult for adults, such as squeezing through narrow passages or operating gears with their small hands. Child labour was considered a legitimate evil to cope with poverty and misery. Later, in the mines of Montevecchio and Ingurtosu, a new treatment was introduced for the recovery of galena and blende, which was carried out in several stages: the material was crushed into very small pieces and then conveyed to large mills where, with the help of water, it was reduced to sludge. This in turn underwent chemical treatments to separate blende and galena from sterile material and then to extract zinc and lead (through smelting furnaces).

In 1948 the reinforced concrete hopper was built for loading onto trucks.

On the walls you can still see the holes made to test the perforators.

The Entomological Exhibition is part of a didactic itinerary in the mining area. It documents the ties that have linked man to insects since time immemorial and relates the role of these small animals in nature to human activities, including mining. The aim is to highlight the ecological value of insects in an area that wants to build its future on the environment, as well as on the mining landscape. The exhibition is based on the display of illustrative panels of various types of insects and is organised in such a way as to outline a route that is both instructive and curious. The exhibition is easy to read, even for the youngest visitors, and has been designed to follow the thin line between the human and insect worlds, illustrating the relationship between them and focusing in particular on aspects relating to the environment, the economy and sustainable development. It also offers a comparison between the work of humans and that of insects, which often shows curious similarities.

EXHIBITION ON SPORT IN THE MINING SHAFT

Antimo Murgia was born in Suelli on 29th March 1934. He died in Genoa in 2004, the city he went to as an emigrant. He went to work in the mines of Ingurtosu in 1952 until 1964. That was the golden age for cycling in Sardinia. A host of bold young men took up cycling more out of necessity than sporting ambition. By night he worked underground at Gennamari and by day he rode his bike. His sporting career began in 1954 and ended in 1967. He won 157 races, and there were countless 2nd and 3rd place finishes. He won all the most important races at regional level. He was a finalist in the San Pellegrino Trophy, the amateurs’ tour of Italy, in 1957/59/60.

In 1958 he signed a contract to become a professional cyclist with Gino Bartali’s San Pellegrino team, but to avoid leaving his family and Sardinia he refused and cancelled the contract. Ingurtosu was always in his thoughts even after he left Sardinia. He was also proud of his workmates who shared their hardships and triumphs with him. He rode his bicycle for them too. His dream was to give with his sporting exploits, warmth and notoriety that Ingurtosu deserved.

The Montevecchio, Ingurtosu and Gennamari mining vein is about 12 km long and is the most beautiful vein in Europe with one of the most remarkable galena deposits. This vein is rich in galena, which in some cases is up to 3 m thick, and gangue, consisting of blende, various types of pyrite, iron carbonates, quartz and clay. The mineral vein with all the lead-zinciferous deposits of the Arbus area was formed by the granite magma due to the volcanic activity of Monte Arcuentu. 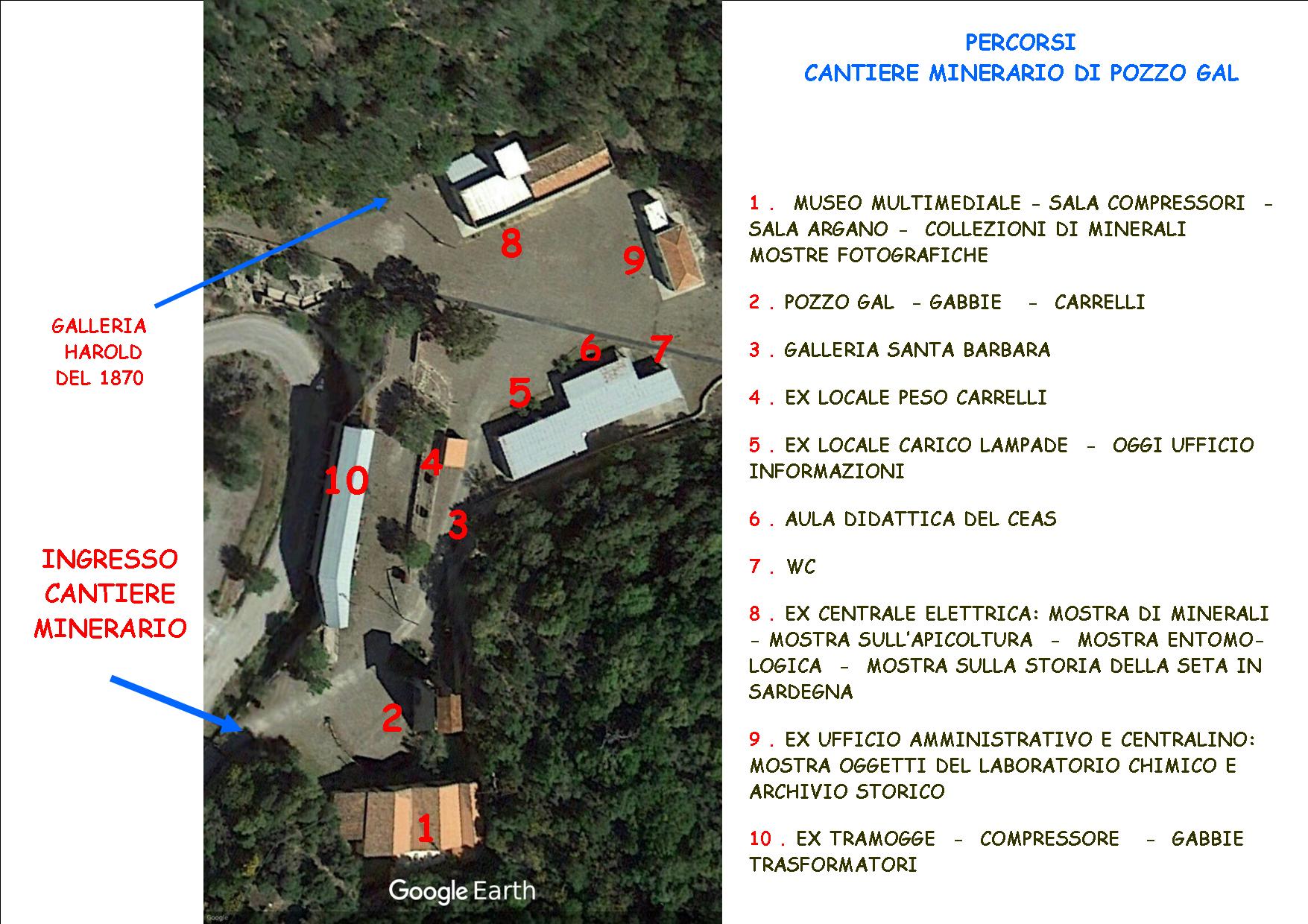